About Kassiopi
Kassiopi is a lovely fishing village on the northeast coast of Corfu,Kassiopi Corfu Greece about 36 kilometers from Corfu town. 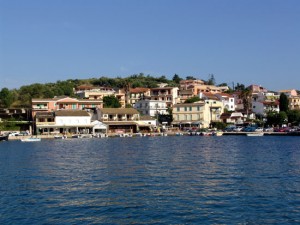 Although the village has grown significantly over the past thirty years, the beautiful harbour and the village square remain largely unchanged. Kassiopi has something for everyone: a fine selection of beaches, plenty of bars, restaurants, shops and boats. Here the old sits comfortably side by side with the new and while you relax in the port you can enjoy the view of its Byzantine Fortress, the rugged coast of Albania and the comings and goings of fishing vessels.

Uniquely on this coast, as wel…l as the ubiquitous “tourist shops” and every kind of eating and drinking facility, there are banks with cash machines, doctors and pharmacies, internet cafes and supermarkets, a school and a church (where sightseers are welcome, as long as they respect the traditions), travel agents and a police station.

Motor boats, which can be driven by children or adults during the daytime only, are available for hire by the day or week, at prices from 70 Euros (US$90) per day. Excursions run daily from the harbour to all parts of the island.

The village dates from around 200 BC when the king of Epirus realized the strategic importance of the north-east coast of Corfu. After the Roman subjugation of the island in 230 BC, the importance of Kassiopi is proven by the many notable hits including the emperor Nero who chose this place to build his baths while visiting the local temple of Zeus. At that time Kassiopi had even its own mint.
Nowadays, the Church of Kassiopi is located on the site of the old temple, built centuries ago by Kassius Zeus believers. Above the town are the remains of Kassiopi Byzantine Castle. The remains overlook the harbour and continue around the headland. Today the castle is mainly ruinous, but parts of the walls can be seen from the coastal road around the headland.
You can walk among the ruins and the top ramparts offer an excellent view of the Albanian coastline. Recent efforts are being made for its restoration.

Corfu is a Greek island in the Ionian Sea. It is the second largest of the Ionian Islands,[1] and, including its small satellite islands, forms the edge of the northwestern frontier of Greece. 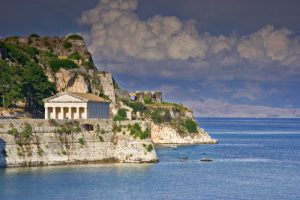 The island is part of the Corfu regional unit, and is administered as a single municipality. The municipality includes the island Corfu and the smaller islands Ereikoussa, Mathraki and Othonoi. The principal city of the island and seat of the municipality (pop. 33,886) is also named Corfu. Corfu is home to the Ionian University.
The island is connected to the history of Greece from the beginning of Greek mythology. Its Greek name, Kerkyra or Korkyra, is related to two powerful water symbols: Poseidon, god of the sea, and Asopos, an important Greek mainland river. According to myth, Poseidon fell in love with the beautiful nymph Korkyra, daughter of Asopus and river nymph Metope, and abducted her. Poseidon brought Korkyra to the hitherto unnamed island and, in marital bliss, offered her name to the place: Korkyra, which gradually evolved to Kerkyra (Doric). Together, they had a child they called Phaiax, after whom the inhabitants of the island were named: Phaiakes. This term was transliterated via Latin to Phaeacians.
The island’s history is laden with battles and conquests. The legacy of these struggles is visible in the form of castles punctuating strategic locations across the island. Two of these castles enclose its capital, which is the only city in Greece to be surrounded in such a way. As a result, Corfu’s capital has been officially declared a Kastropolis (“castle city”) by the Greek government. Corfu was long controlled by Venice, which repulsed several Turkish sieges, before falling under British rule following the Napoleonic Wars. Corfu was eventually ceded by the British Empire along with the remaining islands of the United States of the Ionian Islands, and unification with modern Greece was concluded in 1864 under the Treaty of London.
In 2007, the city’s old city was designated for the UNESCO World Heritage List, following a recommendation by ICOMOS.
Corfu is a very popular tourist destination. Up until the early 20th century, it was mainly visited by the European royals and elites, including Emperor Wilhelm II of Germany and Empress Elisabeth of Austria; today it is also widely visited by middle class families, (primarily from the UK, Scandinavia and Germany) leading to mass tourism. It is still popular with the global elite however, and in the island’s northeast the homeowners include members of the Rothschild family and Russian oligarchs.